Street Fighter V is a good game at its core, but it doesn’t offer much to those who are new to the series. It’s boring, short stories aren’t enough to keep anyone busy offline, despite its online matchmaking being a solid experience. Street Fighter V’s roster makes it difficult to favor just one character, but even with a variety favorites to choose from, it doesn’t compensate for missing features.

The telling of short stories

The Story Mode of Street Fighter V isn’t deep, nor is it interesting enough to spend a lot of time playing. To it’s credit, it does provide some backstory to new characters, but these lack any real substance. Sure, it’s nice to learn that Rashid is searching for a friend gone missing, but I found this story to be boring. Laura’s story, however, was the only tale to catch my interest as her journey involved fights against fellow compatriots in an efforts to becoming a more powerful individual. Her drive to becoming the best competitor in Street Fighter V kept me interested enough that I decided to invest in her on a competitive level. After falling in love with her passion to becoming the best street fighter, I trained with her character for countless hours, and decided to test my skills online.

Going online and playing against others in Street Fighter is what makes the series so popular. Street Fighter V’s online servers run without lag during online matches, but you must endure twenty-to-thirty seconds of load time, prior to these engagments. My biggest issue with online matches, however, is how they occasionally fail to record post-match data, which is essential to your character’s online statistic that’s purely meant for boasting your skill level. Individuals deserve the experience points for their online efforts, but should the data not be recorded at the end of a fight, it’s like the match never happened. This was frustrating and happened frequently. I can only hope that these instances are patched in the near future.

Choosing your favorite child is always a hard thing to do

As of right now, Street Fighter V has a roster of 16 characters at launch. Returning characters like Ken or Ryu can attack enemies from across the screen, whereas new fighters like Rashid and Necalli are better facing opponents up close. Most of my time was spent playing as the pyro-weidling elder, Dhalsim, as I mostly favored his lightening-fast teleport and long-range attacks, which provided me with an advantage over grapplers. It’s certainly hard to pick your favorite character in Street Fighter V as every fighter brings something unique to the experience. No matter your play style, the balanced roster encourages you to choose more than one favorite. Street Fighter V seems to favor competitive players over the casual audience as it secludes the causal audience to a limited experience. Those not interested in online play are given three modes:  Story Mode, Tutorial Mode, which allows the user to practice moves on their own, or Survival Mode, which is a mode that pits individuals against a list of challengers. 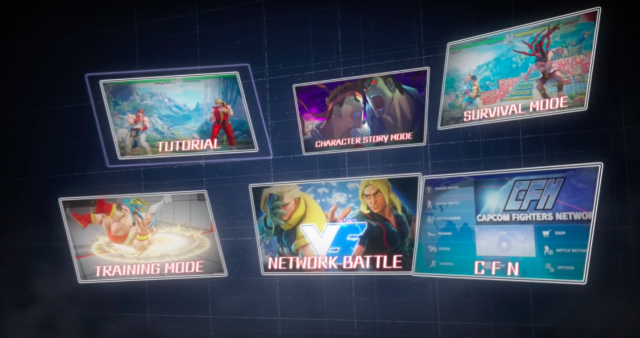 Street Fighter V is great if you are already a hardcore fan of competitive fighting games. Online servers work without a hitch during matchmaking, and the roster of characters has enough variety to encourage many different play styles. Unfortunately, Street Fighter V doesn’t do much for casual players with its boring story mode and missing features.